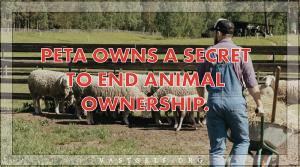 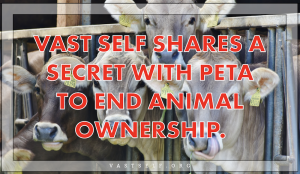 Vast Self shares a secret with Peta to end animal ownership.

PETA owns a secret to ending animal farming and other unfortunate relationships between humans and animals currently protected by the law.

CHICAGO, IL, USA, November 28, 2020 /EINPresswire.com/ — Vast Self Public Charity announced the sharing of a newfound secret with PETA. This secret will help end animal farming and other unfortunate relationships between humans and animals currently protected by the law. It is a secret beneficial to both humans and animals, blurring the line previously drawn between them.
This secret is based on the fact that the senses of most humans cannot perceive that they and animals are the same self.
All the laws we have were made on the false belief that our senses give us an accurate picture of the world. Today, humans are undoubtedly convinced that all animals possess a separate being (existence, self, life) from them; however, a simple analysis proves animals and humans aren't separate beings (no one possesses own-existence, own-self, own-life). This shocking fact cannot be refuted by science or logic, and that is the secret PETA owns.

Lunda Hardy, a spokesperson for the charity, said: "Current animal ownership is based on the assumption that a human can take ownership of an animal; however, with the new understanding of the deceptive nature of our senses, this is no longer possible. Since human being exists without own-self and animal exists without own-self, there is no owner with own-self who can own anything with a different own-self. Similarly, since animals exist without own-self, there is no entity with own-self that could be own by anybody or anything. Since humans and animals are the same self, no owner or the own can be found in reality beyond the conceptual idea 'human', 'I am an owner', 'animal' and 'you are my property.' So, ownership is only a conceptual idea imposed onto a self by the same self. Once humans grasp at this new discovery, ownership will be unthinkable, as it would be equivalent to one part of your body owning another part of the body with rights over it. Vast Self Charity is willing to pay $100,000 to anyone who can disprove this fact. Ending animal farming by reversing the view that animals can be properly will bring great benefit to humans, animals, and the environment."

Vast Self is a 501(c)(3) public charity #83-1669166 dedicated to showing the world that everlasting peace and happiness is indeed possible and easy to achieve. A new first-rate problem-solving method exists that can reveal and remove the key to all human-made conflicts and sufferings, making any future disputes inconceivable. This solution also guarantees not to interference with people's race, status, religion, philosophy, finances, politics, etc. The resolution to all our worldly struggles lies in understanding that our senses have not shown us how everyone actually exists. Throughout history, such ignorance has been the only obstacle to worldwide peace, compassion, unity, and happiness. But together, we can permanently reverse this.

PETA owns a secret to free all animals from the horrors of human ignorance such as animal ownership, animal farming and other exploitations.