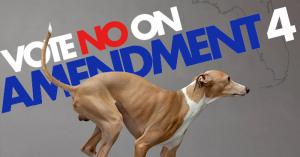 Amendment 4 would make it all but impossible to pass statewide ballot measures by requiring supermajority approval votes in two separate elections.

No state is tougher than Florida to qualify and pass a ballot measure, largely because of the state’s supermajority requirement for enactment”
— Wayne Pacelle

WALTON COUNTY, FLORIDA, UNITED STATES, October 15, 2020 /EINPresswire.com/ — (Walton County, Fla.) – Leading animal welfare groups urged a “No” vote on Amendment 4 on this year’s ballot, charging that the measure would make it all but impossible to pass statewide ballot measures by amending the state constitution to require two votes in two separate elections that each require supermajority thresholds of 60 percent. The corporations or individuals have spent more than $9 million to qualify and promote the measure, yet they have successfully concealed their economic interest.

The citizen’s initiative process, as well as referred measures promoted by non-profit organizations, has been crucial in driving reforms for animals and protection of wildlife, including a 1994 measure to stop some forms of commercial net fishing, a 2002 measure to ban the extreme confinement of pigs on factory farms, and in 2018 to ban greyhound racing.

“No state is tougher than Florida to qualify and pass a ballot measure, largely because of the state’s supermajority requirement for enactment,” said Wayne Pacelle, president of Animal Wellness Action. “Now the shadowy backers of Amendment 4 want to make citizen’s initiatives virtually impossible by requiring two votes, two years apart, that each requires more than 60 percent of the vote.” Pacelle led the fight for the 2002 anti-factory farming ballot measure to stop the immobilizing of pigs in gestation crates – the first-ever measure in the nation to provide minimal protection for farm animals. Since then 250 major food retailers (e.g. McDonald’s and Walmart) and 10 other states have adopted similar anti-confinement policies, including for laying hens jammed into battery cages.

In November 2018, animal welfare groups, led by GREY2K USA Worldwide and Animal Wellness Action, convinced voters to approve Amendment 13 to ban greyhound racing in the state – which hosted 12 of the 18 tracks in the United States. Nearly 70 percent of voters, in all 27 Congressional Districts, favored the measure. Within the last two years, nine of the 12 tracks have closed, and the remaining three will cease live racing by the end of the year.

“Animal welfare groups simply don’t have the resources to gather a million signatures and then conduct and win two enormous persuasion campaigns in a state as large as Florida,” said Carey Theil, executive director of GREY2K USA. “Amendment 4 may mean that the greyhound racing ban is the last animal welfare measure ever to appear on the statewide ballot.” Theil and his colleague Christine Dorchak had campaigned for 20 years to end greyhound racing in Florida and helped to convince the Constitutional Revision Commission (which meets once every 20 years) to refer Amendment 13 on the 2018 ballot.

Grassroots animal welfare groups and sanctuaries also oppose the measure. “Animal welfare groups are taking in animals who are the victims of cruelty and neglect, but all of us who do this work know that it’s vital to prevent mistreatment of animals on the front end,” said Laurie Hood, president of the Alaqua Animal Refuge in Walton County and Florida state director for Animal Wellness Action. “When the legislature fails to act on a common-sense to prevent cruelty, we need the safety valve of the initiative process to get the job done.” The Alaqua sanctuary sustained massive damage to its complex of animal-care structures after Hurricane Sally submerged so much of the Florida panhandle.

Florida would become the only state in America with a requirement to get 60% of the vote twice to pass a constitutional amendment.

Animal Wellness Action is a Washington, D.C.-based 501(c)(4) organization with a mission of helping animals by promoting legal standards forbidding cruelty. We champion causes that alleviate the suffering of companion animals, farm animals, and wildlife. We advocate for policies to stop dogfighting and cockfighting and other forms of malicious cruelty and to confront factory farming and other systemic forms of animal exploitation. To prevent cruelty, we promote enacting good public policies, and we work to enforce those policies. To enact good laws, we must elect good lawmakers, and that’s why we remind voters which candidates care about our issues and which ones don’t. We believe helping animals helps us all.

The Animal Wellness Foundation is a Los Angeles-based private charitable organization with a mission of helping animals by making veterinary care available to everyone with a pet, regardless of economic ability. We organize rescue efforts and medical services for dogs and cats in need and help homeless pets find a loving caregiver. We are advocates for getting veterinarians to the front lines of the animal welfare movement; promoting responsible pet ownership; and vaccinating animals against infectious diseases such as distemper. We also support policies that prevent animal cruelty and that alleviate suffering. We believe helping animals helps us all.

GREY2K USA Worldwide is the largest greyhound protection organization in the United States with more than 250,000 supporters. As a non-profit organization, the group works to pass laws to end the cruelty of dog racing and promote the adoption of ex-racers around the globe. For more information, visit GREY2KUSA.org.