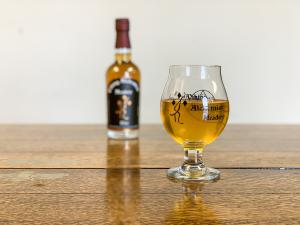 The Viking Alchemist Meadery’s mead, Bliss, has been awarded Best Mead in Georgia in the 2019 Georgia Trustees Wine & Spirits Challenge, for a third time.

Bliss is one of the six Signature meads brewed by the Viking Alchemist Meadery, forming the foundation for a broad line of meads which also include seasonal and barrel-aged meads. Within the category, Bliss is described as a “sweeter” mead, carrying a smoother, softer flavor than dry meads, allowing the mellow, delicate taste of honey to come forward. Brewed with pear and almond, Bliss has been described to be reminiscent of ameretto, inspiring memories of summer afternoons and warm meadows.

Like all Viking Alchemist meads, Bliss is brewed with locally sourced ingredients, supporting the growing organic movement that has been flourishing in Georgia, and encouraging more apiaries around the state, boosting local economy and nurturing our environment. In addition to local, all-natural ingredients, all Viking Alchemist Meadery meads are also gluten free, offering an exciting alternative to patrons with dietary restrictions.

“We’ve been twisting ingredients together to create unusual combinations since we started,” says Tamara Kosoris, Head Brewer and creator of Bliss. “Part of our mission has been to bring an ancient craft into the modern era, reflecting of modern tastes and sensibilities. Bliss has been one of our greatest works.”

As a beverage, mead (honeywine) dates back to ancient cultures. Brewed with nothing more than honey, yeast and water, mead predates the advent of agriculture, as honey was readily accessible. Every culture, worldwide, developed some form of mead, independently. When cultivated grains made other alcohol options possible, mead fell out of favor but was never forgotten. Today, with a growing dialogue around bees, pollinators and natural ingredients, mead has made a strong come back and has again entered the national zeitgeist.

Today, there are over 300 meaderies operating nationally, according the American Mead Makers Association, and growing. The beverage has captured a popular position among craft enthusiasts who have been overwhelmed with the exploding craft beer industry and are seeking something new and different. Meads, like Bliss, offer a refreshing and surprising alternative to an audience that is always seeking a new experience and flavor.

About the Viking Alchemist Meadery
The Viking Alchemist is a family and veteran owned Meadery and Cidery, established in 2015, Marietta GA. The Mead is sold and distributed throughout Georgia with a tasting room open Thursday-Sunday. Over the 4 years of operation, the Meadery has developed a reputation for merging modern sensibilities with the ancient craft of mead making, earning the reputation of an “alchemist.”

About Georgia in the Georgia Trustees Wine & Spirits Challenge
Founded by Parks Redwine, Jane Garvey, and Douglas Mabry, the Georgia Trustees Wine and Spirits Challenge recognizes the increased excellence of Georgia-produced wines and wines produced from out-of-state-grown grapes by Georgia vintners. Since 2016, the “Challenge” has been the measure of the progress made by the Georgia wine industry and a means by which peer review can foster industry improvements.