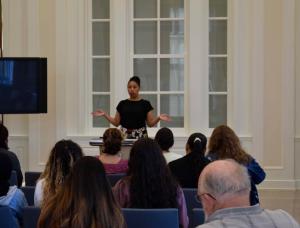 CLEARWATER, FL, UNITED STATES, November 28, 2019 /EINPresswire.com/ — On Saturday November 23rd, students and guests from a religious studies class at St. Pete College’s Clearwater Campus visited the Scientology Information Center in downtown Clearwater for a talk about Scientology and tour of the Fort Harrison. Their purpose was to learn more about Scientology, the world’s youngest major religion of the 20th Century.

Ms. Amber Skjelset, the manager of the Center, welcomed the guests, and provided a description of the basic principles of Scientology. This included viewing an episode from the Scientology TV Network called, “My Philosphy,” giving insight into the founding of Scientology by L. Ron Hubbard.

After lunch, the students attended the Fort Harrison’s monthly historic tour. There they learned that: the iconic building was built during Clearwater’s land boom in the 1920s; visited the “palatial” 11th floor Penthouse where the Rolling Stones once stayed in 1965; and learned how the Fort Harrison was Pinellas County’s first skyscraper.

In addition to visiting the Fort Harrison’s well-appointed spaces, guests learned how Church partners with local non-profits providing support to their causes by sponsoring their events. This assists registered 501c3s to retain 100% of the funds they raise to further their charitable causes.

One guest and long-term resident said after the experience,
“I’ve lived in Clearwater since the ‘70s and I learned a lot of things today that I didn’t know about the Church. I enjoyed finding out the commonality of all religions – which the professor had us keep in mind during the presentation. I am really glad I came and got to see inside the Fort Harrison. I saw it in the ‘70s it’s nice to see it again. I can't wait to go back and tell everyone about this.”

The Scientology Information Center is open daily from 10am-10pm for self-guided tours. Group presentations and similar tours for the community can be scheduled at the Center by contacting the Manager, Ms. Amber Skjelset, at 727-467-6966 or e-mail her at amber@cos.flag.org.
The Info Center consistently applies, “Respect the religious beliefs of others,” from L. Ron Hubbard’s The Way to Happiness, a non-religious, common-sense moral code when inviting all to visit the Center.

The Scientology Information Center, located in the century-old Clearwater Building in downtown Clearwater, opened on July 11, 2015, and currently houses a gallery of audiovisual displays with some 400 videos. The Center is open to all and provides a self-guided tour showing basic Scientology beliefs, Churches around the world, ongoing social programs and the life of L. Ron Hubbard, Scientology’s founder. The Center offers tours to the broad public and civic leaders; holds concerts, theatrical performances and receptions for the community; and opens up the use of its conference room to social, civic and non-profit groups.

The Fort Harrison serves as the international religious retreat for the Church of Scientology. With more than 11,000 Scientology Churches, Missions and groups spanning six continents, Scientologists come to Clearwater from all over the world for religious training and ministerial services. The Fort Harrison is made available to community groups and charities for their special events and fundraisers. Scientology is an applied religious philosophy based on the work of L. Ron Hubbard.

Photo Caption: Ms. Amber Skjelset, Scientology Information Center Manager delivering a presentation to students from St. Pete College religion and philosophy classes on Saturday, November 23rd.
The Scientology Information Center hosts regular events and receptions for members of the community. The center is open daily from 10am-10pm and requires no appointment to visit