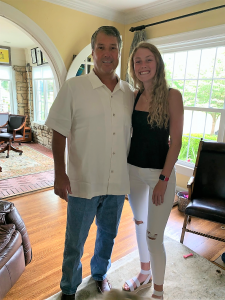 LOUISVILLE, KY, UNITED STATES, November 27, 2019 /EINPresswire.com/ — Lawrence J. O’Bryan has always believed in the power of giving back. He gives credit to his parents for instilling him with his sense of generosity and responsibility. And he has spent a lifetime putting those lessons to work.

Larry O'Bryan is the CEO and owner of TPC-KY, Inc., an award-winning company that supplies labels for major manufacturers including GE Appliances and Black & Decker. This company is Larry O'Bryan's most recent success in a prolific career that spans four decades. He previously found success as a real estate renovator at O’Bryan Properties before establishing himself as the most successful political media strategist in Kentucky at Pro-Active Media.

Through his current company, Lawrence J. O'Bryan offers services that improve workplace productivity for his clients. He strives to create a more efficient and better workforce for everyone and he utilizes his company’s resources to give back to the community through job opportunities that provide superior benefits for his employees. But Larry’s company is not the only way that he expresses his generosity.

Larry's mother, Ramona, and father, Charles, made many sacrifices for him during his childhood. Both passed away in the mid-2000s, a year apart, but the sacrifices they made for their son continue to inspire him. "It's a major reason I have given back,” says Larry.

Larry O'Bryan established an endowment at St. Xavier High School to assist young men who cannot otherwise afford to attend the prestigious all-male college preparatory school. As the sole donor to this endowment, Larry believes that his contributions will allow other young men to receive a quality education that could change their lives.

Acts of kindness such as this reflect the sacrifices that Larry saw his parents making for him and his siblings. Larry’s parents did not grow up wealthy, but each worked diligently to ensure that Larry and his siblings would have a better life and a quality education. In fact, as they achieved a level of success from renovating houses in the Louisville area, a large percentage of their earnings went to their children’s education. They believed that giving this opportunity to their children would pay dividends in their future.

Now, Larry O'Bryan wants to continue the legacy that his parents began by helping others as much as possible.

Another example of the impact that Larry’s parents made in his life can be seen in the charities and organizations to which Larry contributes. Larry’s father, Charles O’Bryan, fought in France and Germany during World War II, which motivated Larry to make regular donations to the Salvation Army. "We just donated to the Salvation Army for hurricane relief," Larry O'Bryan said. "I also donate to Catholic Charities every year because that was my mother's favorite charity."

Larry O'Bryan supports his community with the company he owns and with the products he makes. But he also makes a tremendous impact on a personal level by making regular contributions to worthwhile charities and organizations in hopes that he can motivate others in the same way his parents inspired him.

Learn more about Lawrence J. O'Bryan by connecting with him via his LinkedIn profile:

Find out more information about TPC-KY, Inc., by visiting the website: