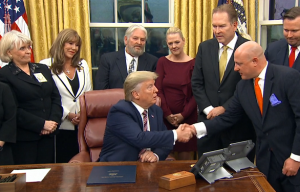 With today’s act, we take the critical step toward being more responsible and humane stewards of our planet and all who we want to cherish and take care of, and all of those who live on it.”
— President Donald J. Trump

"We have a responsibility to honor the dignity of God’s creation," said President Donald J. Trump. "With today’s act, we take the critical step toward being more responsible and humane stewards of our planet and all who we want to cherish and take care of, and all of those who live on it."

“We’re thrilled to see the first anti-cruelty statute in American history signed into law and applaud President Trump and the Congress for providing the voiceless with a level of protection never seen before,” said Marty Irby, executive director at Animal Wellness Action. “The PACT Act will allow federal authorities to crack down on the most egregious of animal abusers and help keep American pets safe from harm.”

“It is the mark of a civilized nation to establish a bright-line legal standard against malicious mistreatment of animals,” said Wayne Pacelle, founder of Animal Wellness Action who developed the original concept of the PACT Act five years ago. “Today we fortified the legal framework against animal abuse in a foundational way.”

“While Congress is gridlocked on so many issues, there is one issue of consensus: that animals deserve protection from malicious abuse; the PACT Act lays a strong foundation to better protect some of the most vulnerable among us,” said Holly Gann, Director of federal affairs at the Animal Wellness Foundation.

“For many Americans, their pets are a part of the family — that’s been true in my house and that’s why the signing of this bill today is such an important milestone,” said U.S. Rep. Vern Buchanan (R-FL). “I want to thank all of the animal welfare groups who worked so hard to help get this bill passed and signed into law.”

The PACT Act would prohibit extreme acts of cruelty when they occur in interstate commerce or on federal property and cracks down on widespread sexual abuse of animals (bestiality). While current federal law bans the sale of videos showing illegal acts of cruelty, it does not prohibit the underlying conduct. Law enforcement agencies across the country, the National Sheriffs’ Association, the Fraternal Order of Police, and the Animal Wellness National Law Enforcement Council, have endorsed the PACT Act because of the well-documented connection between animal cruelty and violence against people.

The bill obtained a tremendous showing of support with 302 cosponsors in the House and 41 in the Senate. The Senate bill previously passed the Senate by unanimous consent in the 114th and 115th Congress, but it was blocked in the House at that time by former House Judiciary Chairman Bob Goodlatte (R-VA) despite the overwhelming bipartisan support.