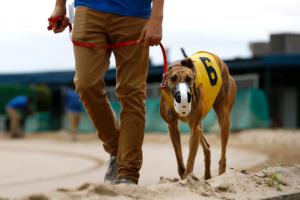 AWA had been urging Delaware North, the parent company to Southland Casino Racing in Arkansas,
to get out of the business of running dogs

This is a short phase-out, and it’s good for dogs and for Southland and its reputation.”
— Wayne Pacelle

LITTLE ROCK, ARKANSAS, USA, October 17, 2019 /EINPresswire.com/ — Animal Wellness Action, a national organization promoting legal standards against cruelty, applauded an announcement made today by key stakeholders that live greyhound racing will end in Arkansas, one of the last states to stage this archaic form of animal competition. The agreement, approved by the state racing commission, promises to end dog racing by 2022.

“We applaud Southland and its parent company Delaware North for getting this deal over the finish line,” said Wayne Pacelle, founder of Animal Wellness Action. AWA and the Center for a Humane Economy, working with GREY2K USA Worldwide, have been urging the Buffalo-based gambling and food service company that owns Southland Casino Racing in West Memphis, Ark. to develop a plan to end racing. “This is a short phase-out, and it’s good for dogs and for Southland and its reputation.”

Commercial dog racing is illegal in 41 states, and less than a year ago, Florida voters approved Amendment 13 to phase out the practice there by the end of 2020. Already, 6 of the 12 tracks in the state have been shuttered since the landslide vote last December.

Outside of Florida, there are a handful of tracks operating in the U.S. with tracks in Alabama, Iowa, and Texas barely hanging on. Delaware North owns two tracks in West Virginia, and the agreement in Arkansas should be an indicator that the company wants out of this business in order to emphasize other gaming activities.

“It is our hope that Delaware North works out a similar agreement with greyhound breeders and other key stakeholders in West Virginia,” added Pacelle. “West Virginia does not want to be the last place in the United States with regular racing that put greyhounds at risk.”

Most tracks don’t make money, but gambling interests that own the tracks are being obligated by the states to subsidize the operations and to require that the tracks run dogs even when it’s a money-loser. The states shouldn’t force businesses to conduct operations that they don’t want to do and that lose money.
At the few tracks that remain, the dogs often perform in front of nearly empty arenas. Instead of cleaning up their act, the industry has fought reform efforts. Dogs play an important role in our lives, and they deserve to be protected from unpopular spectacles that put them at risk.