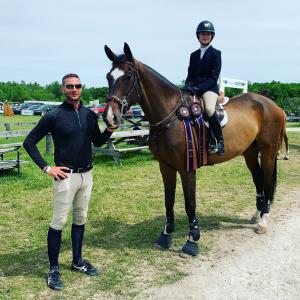 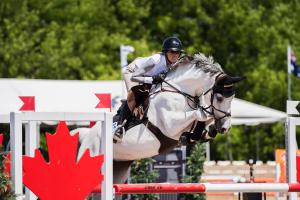 Head trainer and general manager of Clermark Equestrian, Inc., Brock Clermont has recently announced news of an all-new partnership with ARose Farms, LLC's Alexa White as For The Win Farms, based at Angelstone Tournaments. An Ontario native and a veteran of the professional equestrian world in Canada, the United States, and overseas, Clermont provides a closer look at the arrangement.

"We'll be training at the newest and most modern show facility in eastern Canada," explains Clermont. The pair, he says, will be taking on new hunter, jumper, and equitation customers, in addition to working with existing clientele, including adults, teenagers, and younger children.

Brock Clermont's Clermark Equestrian, Inc. specializes in the training of students and horses for hunter, jumper, and equitation in 'A' circuit and international competitions. "We take an all-inclusive approach to the training and care of our clients and horses," adds Clermont, head trainer and co-founder of the organization.

ARose Farms, LLC, meanwhile, prides itself on providing premium care for both horse and rider, catering to the specific turn-out needs of individual clients and their horses.

Clermont and White's new partnership as For The Win Farms will see the duo establish operations at Angelstone Tournaments. The venue is located in the village of Rockwood, Ontario, less than a 30-minute drive northwest of Toronto's Pearson Airport.

Further to being the base for For The Win Farms, Angelstone Tournaments has also been selected to host the Young Horse Championships, the CET Regional Medal and Mini-Medal finals, and an FEI World Cup Qualifier during international week.

"Angelstone Tournaments is famed for its world-class show jumping and family entertainment, all season long," says Clermont, "as well as for its hospitality, including its luxurious VIP pavilion, ringside boxes, and the Cabana Coast Lounge."

Since its inaugural year in 2010, Angelstone Tournaments has, under CEO Keean White, grown to become something special in the equestrian community. It has, according to Clermont, become a place to get away from the city, a place for families, and a place to take in tremendous sport.

"With For The Win Farms now based at the venue, Alexa and myself will be providing what we call extraordinary horses for extraordinary people," Brock Clermont adds, wrapping up.

For more information about For The Win Farms, call 310-612-9483 or visit https://www.facebook.com/forthewinfarms/.