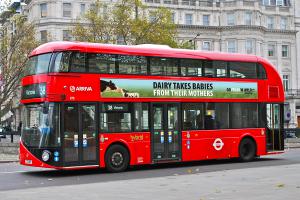 Go Vegan World accuses Exterion Media Ireland of preferential concern for the Irish dairy industry over the right of the public to the facts about animal use.

Exterion Media has a preferential concern for the Irish dairy industry over the rights of the public to the information in the Go Vegan World ads.”
— Sandra Higgins, Founder & Director, Go Vegan World

DUBLIN, IRELAND, December 28, 2018 /EINPresswire.com/ — For the third year running, Exterion Ireland, the only company that carries ads on bus and trains in Ireland, is refusing to run Go Vegan World ads providing the public with information about the dairy industry.

Go Vegan World launched its animal rights and vegan education advertising in Ireland three years ago. It now runs ads across the UK as well as internationally. It is currently running a massive campaign consisting of more than 2000 ads for Christmas and New Year in Ireland and the UK. The ads feature sheep, pigs, turkeys and cows with messages such as: “Veganism = Recognising Me as Someone, Not Something”; “Defenceless & Innocent Yet We Kill Them”; “It’s Not A Personal Choice When Someone is Killed”, and “Dairy Takes Babies from their Mothers”. The group states that the aim of the ads is to remind people that the animals we eat, wear and use in other ways are capable of physical and psychological feelings and, as a result, we do not have the right to use or kill them. The ads refer people to the free vegan guide available through their website.

However, some ads were rejected by Exterion Media, the company contracted by Dublin Bus and Irish Rail to sell advertising space on buses and in train stations. The ad in question featured a mother cow and her calf and the statement “Dairy takes babies from their mothers.” The same ads are published by other Irish advertising companies and by Exterion Media in the UK.

Exterion has failed to-provide specific reasons to Go Vegan World for refusing to run the ad, citing only very broad grounds, “Might adversely affect the interest of the site owner” and “Might result in Exterion Media being in breach of any of its contractual obligations to a site owner,” but refusing to provide any specifics.

Go Vegan World founder and director, Sandra Higgins, notes that the Irish dairy industry runs large ad campaigns through Exterion Media in Ireland. She says that “the refusal to carry Go Vegan World ads referring to dairy points to a very unhealthy situation wherein the only company carrying ads for Irish Bus and Rail appear to have a preferential concern for the Irish dairy industry over the right of the public to the facts contained in our ads.”