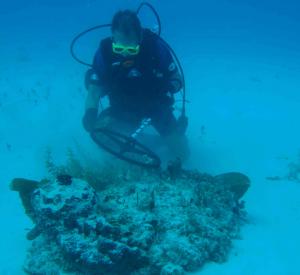 WASHINGTON, DC, USA, November 19, 2018 /EINPresswire.com/ — It wasn’t gold, silver or even precious stones, but copper that caught treasure hunter Ben Benson’s interest this time. Long forgotten and buried away in a nondescript US Government warehouse lay the original master copper engraving plates used to create maps of areas within the United States. Authorized by Congress in 1880, the hand-etched engravings were typically 17” x 21” each requiring hundreds of hours of careful work, resulting in true works of art that were the most accurate maps of our country for many years. They were produced this way from the 1880's to the early 1950's.
In 2015, with little fanfare, the US Government decided to dispose of those historical treasures. Any governmental agencies and museums that were aware of the disposition could apply to receive some of the engravings, with the rest to be auctioned off.
That’s where Benson came in. He regularly peruses the government auction website and has bid on many unusual and varied items, such as a Cold War-era, 140-acre underground nuclear protected complex in Kansas, a small town in the Virginia Mountains formerly used as an NSA-Navy Base and a massive ice-breaking tugboat. In 2013, Benson even bought the USS Baylander, a helicopter landing ship billed as the US Navy’s smallest aircraft carrier.
“I first saw the copper plates on the government auction website, listed, oddly enough, in the jewelry section,” Benson said. “What I saw truly amazed me. The plates capture America as it once was, a moment frozen in time. Think of it, Newport Beach, CA-1894, with just a handful of buildings along the coastline; Malibu, CA-1900, as a nearly undeveloped coast; and also a (back-then) “small town” — Bridgeport, CT in 1889.
“The map plates are national, historic treasures. I am surprised that the US Government would dispose of them. Wouldn’t it be a shame if they were melted down for the scrap copper value?”
Keenly aware of the risks of finding lost “treasure”, Benson nonetheless spent a small fortune acquiring 862 sets of the plates, encompassing some 44 states and weighing 16 tons. Now he hopes to connect them with others who care about history.
Currently, Benson is focusing on reaching out to those people in the areas represented by the maps, who, Benson believes, will find meaning and pride in owning and helping to preserve a part of their local history. He will begin selling the collection in December offering them first to local registered professional surveyors (plus civil engineers and foresters). These are the people who would be most familiar with what a USGS Quad map is and who maintain and preserve geographic history every day in their work. I am writing each professional surveyor individually and offering them a substantial discount letting them acquire the map engravings for their area at my actual cost from the government.