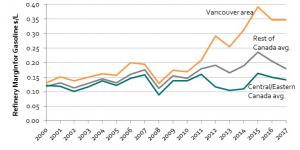 Since 2010, the average refining margins for gasoline in the Vancouver fuel market rose faster than in the rest of Canada, resulting in correspondingly higher gasoline prices.

The cost to consumers 2015-2017 of elevated refining margins was $2.4 billion, or $1,730 per household. Clean fuels can bring needed competition.

VANCOUVER, BRITISH COLUMBIA, CANADA, June 29, 2018 /EINPresswire.com/ — A new report conducted by Navius Research and sponsored by Advanced Biofuels Canada explores the causes of abnormally high fuel prices in the Vancouver region, and assesses the potential of clean fuels to provide more competition at the pump.

The cost to consumers of elevated refining margins was $2.4 billion, or $1,730 per household between 2015 and the end of 2017. This is equivalent to an average 13 cent per litre premium on gasoline and diesel over this period for the 80% of BC’s population living in the Lower Mainland and Vancouver Island.

The report builds on Navius’ 2015 assessment of 2010-2014 BC refining margins – a proxy for refiner profits – and finds that the refining margins and resulting costs to BC’s economy have grown since 2015.

Other findings:
• Since 2015, both wholesale fuel prices and refining margins departed even further from underlying crude supply costs to the Vancouver market
• These elevated refining margins and higher fuel prices appear to be the result of a lack of competition in the Vancouver fuel market, which was found to have adequate physical supply; no product shortages or scarcity pricing in this period were evident
• A high degree of concentration in the supply of fuels, and associated barriers to bringing new fuel types into the market have contributed to artificially high prices
• Costs to consumers from elevated refiner margins in the Vancouver fuel market were five times the incremental cost of renewable and low carbon fuel regulations
• Despite 2017 crude costs that were 15 cents per litre lower vs. those in 2010, Vancouver retail gasoline prices were 6 cents per litre higher, with 1 cent per litre of this amount coming from increased taxes
• Policy or market responses that increase refined product or crude supplies – for instance, from an expanded Trans Mountain pipeline or from increases in local refining capacity – were evaluated as unlikely to lower fuel prices as they do not introduce more competition into the fossil-fuel dominated market

In BC, the Renewable and Low Carbon Fuel Requirements Regulation requires progressively higher use of clean fuels in place of gasoline and diesel fuels. In the 2010-2016 period, these fuels reduced 6.37 million tonnes of greenhouse gases, and reduced other pollutants that degrade urban air quality.

The study examined the potential of the Renewable and Low Carbon Fuel Requirements Regulation to incentivize new, independent retail sales and fuel pricing strategies. Opportunities for this are constrained by BC’s carbon tax – which currently applies equally, and inexplicably, to low-carbon biofuels and as it does to high-carbon petroleum fuels – and by excise taxes that are applied on a volumetric rather than an energetic basis. Reform of fuel taxation is needed to attract investments in new fuels retailing. With appropriate adjustments to fuel taxation, the study finds that regulation compliance credit values could lower the cost of low carbon fuels by 35 cents per litre in the province.

British Columbians spend $7.7 billion every year on gasoline and diesel fuels alone, with most of that spending leaving the province. BC’s low carbon fuel regulations are starting to attract investments by globally innovative clean fuels technology companies; made-in-BC low carbon fuels can add economic value to the province and be a solution over time for record-high fuel prices.

The report is available at https://www.naviusresearch.com/publications/2018-refining-margins-british-columbia/